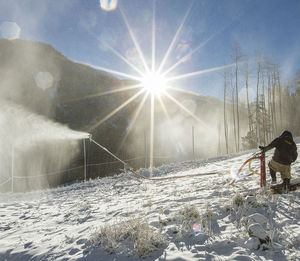 By Anne Constable
The New Mexican

Snow Making in Taos Ski Valley! The high temperature at the base of Taos Ski Valley was predicted to be 51 degrees Wednesday. No real snow is expected in the next week. Forecasts are for sunny skies.

Over the summer, the Taos Ski Valley made a $700,000 investment in snowmaking capacity, which means the top of the mountain will open earlier this season. The goal is for all lifts to be operating by Christmas.

Instead of taking 10 weeks to put snow on about 400 acres, it will take eight because of two new energy-efficient compressors. “We’re not going to increase the amount of snow we make [or the water used],” CEO Gordon Briner said in September. “We’re just going to put that water on the slopes faster.”

Taos Ski Valley also is opening a new fixed-grip lift this season that will take riders to the 12,450-foot Kachina Peak for the first time. Previously, skiers and boarders had to hike there to ski the ungroomed slopes.

These improvements are part of an ongoing overhaul at Taos Ski Valley, which has made few major improvements in the last 20 years.

In September, Taos Ski Valley Inc. announced it is purchasing the Bavarian Lodge & Restaurant at the base of Lift 4. The 2.5-acre property includes the lodge, restaurant and chalets.

In December 2013, the Blake family, which founded the ski area nearly 60 years ago, announced the sale of the resort to billionaire Louis Bacon.

The resort also is in the first phase of a major remodel of its base area.

The snow guns are operating at Sipapu as well, although temperatures are high there, too. Typically, Sipapu crews are looking for temperatures of around 28 degrees to make snow. It is scheduled to open Nov. 15.

Angel Fire announced it had made some snow amid some flurries of the real stuff Nov. 3 and is planning to open Dec. 12.

Wolf Creek Ski Area is kicking off its 75th season by opening on weekends starting Saturday. Conditions are very limited, with a 6-inch base and 14 inches of snow.